Uber’s corporate culture problems began long ago. You could probably say they began at the beginning.

The corporate culture in Uber from the beginning was one of “always be hustlin'” and “stepping on toes” according to an article in BGR. In a culture that hinges on that philosophy, you can expect that there will be personality conflicts. In addition you can expect harassment and abuse. It creates a no-holds-barred atmosphere where the only thing that matters is winning and crushing the competition.

What results is an eventual disintegration of the organization and the business.

What’s resulted for Uber with this?

Uber’s problem is clearly a top-down problem. It has created a poisonous corporate culture that has now put the organization in it’s current position of NO SENIOR LEADERSHIP at it’s most critical moment.

Before we go too far to eviscerate Uber management, however, we may want to see another picture.

More importantly for us than what Uber has done wrong is what we can learn from it and do right.

How Can Leadership Do Better?

Here’s some of the basic leadership lessons I see: 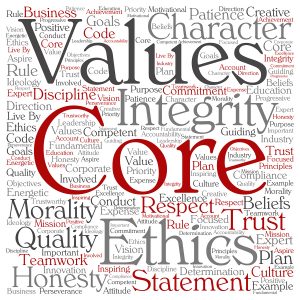 It seems clear that a lack of real values exist in the corporate culture at Uber. When your primary drivers are to “Always Be Hustlin'”, promote “Meritocracy and Toe-Stepping”, and “Principled Confrontation” you easily fall into the trap of justifying behaviors for the sake of organizational success. Which is precisely what happened.

Case in point. Susan Fowler‘s blog post back in February of 2017. in the post she revealed alleged harassment and other abuses at Uber; along with a virtually powerless Human Resources department. When Fowler complained to HR about the manager she reported to directly propositioning her, she expected immediate results. Instead, she was told that while it was clearly sexual harassment the manager in question would simply be given a “stern talking to”. Why? Because he was a high performer and they didn’t want to ruin his career.

Core values place priorities where they belong and provide a barometer for the actions of every department and every employee.

I’m not a big operation right now, actually I’m barely a small operation. However, one of the first things I did when I started was to determine what was most important in what I do. I value trustworthiness, relationships first, and adding value to everyone. Through that, I can then gauge every word and every action around that. Anything that might jeopardize my trustworthiness, sacrifices relationships, or fails to add value simply is not appropriate. Failing to meet any one of these values is a deal breaker.

Whatever behaviors you expect out of your employees has to be not just exhibited but MAGNIFIED by leaders. This is especially true at the executive level.

Years ago I worked for an organization that in the business unit in which I worked started a large Total Quality Management campaign. Each and every employee not only had to develop a personal TQM statement, it had to be posted outside of their cubicle for all to see. I won’t even get into the insanity of creating cubicle world to promote total quality; that’s another talk for another time.

What made it fail was the lack of consistency at the executive level with this. Employees observed actions that were executed that seemed to fly in the face of most of the TQM principles. The reasoning then became that if they didn’t buy it, why should we?

Each senior leader needs to set the bar high for themselves because perception will always be a microcosm of reality. In other words, they will only see in their minds a small measure of what you actually are. If you want to promote trustworthiness, there is no room for moments where you aren’t so trustworthy; otherwise the perception is that you aren’t.

[tweetthis]Whatever behaviors desired in employees must be MAGNIFIED by leaders. #values[/tweetthis]

Place a Priority on the Care and Nurturing of Your People

Employees feel when they are NOT valued. They also feel it when they ARE valued.

Unless you are in an organization where the only person who ever talks to or serves a customer is you, then your employees are the real face of the organization. They will treat customers no better than they themselves are treated. So it only makes sense to place first value as a leader on your employees.

The Law of Reciprocity kicks in here. Treat people with respect and trust. Care for them professionally and personally. Help them get ahead. In return, they will commit more to you and the organization and treat your customers with respect and care.

Plan and Cultivate a Line of Succession

Teams (companies, organizations, throw your own word in here) of any size run in cycles. Leadership should and will eventually change. The ones that sustain success are the ones that have planned for that.

When that eventual change occurs, it’s almost seamless because the core values are still there. Even if some of the style changes, the core does not. The alternative is chaos while new leadership is identified and put in place; as well as for a long time after.

What do you think are the lessons learned here? How can leaders better ensure that behaviors are appropriate and consistent?

It seems one of the most difficult and terrifying things we do as an individual or a manager of an organization is make decisions.  In the background is this agonizing thought that somehow the decision we make is going to send us or our organization irrevocably in the wrong direction and it will lead to disaster.  As we mature over time, we find that it’s just not true; we will almost always find a way to recover.  But we can all learn to be better decision-makers.
First understand that generally there are three categories of decision-makers who make mistakes.
Inability to make decisions is one of the principal reasons executives fail. Deficiency in decision-making ranks much higher than lack of specific knowledge or technical know-how as an indicator of leadership failure.
-John Maxwell

The good news is that there are ways to make better decisions and make them faster and easier.  It will never be easy, but it can be easier.  And it starts with applying three keys.